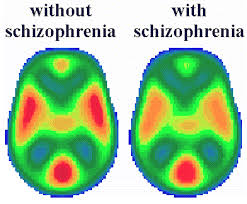 Brain imaging holds the key to why healthy siblings of schizophrenia patients avoid this disorder. The researchers n the latest study have found important differences in brain development during adolescence between those with schizophrenia and siblings who are healthy and do not have this mental disorder. The study showed that the healthy siblings experienced brain abnormalities similar to their schizophrenic siblings, but in the brain of the healthy sibling the brain development normalized and caught up with the development of normal teens without any indication of schizophrenia. Researchers hope that the latest brain imaging results and findings could open up new treatment possibilities. A partnership between researchers from the National Institute of Mental Health in Washington, D.C and the University of Melbourne in Australia made the study possible.

The brain imaging schizophrenia study used magnetic resonance imaging (MRI) technology to map out the brain development and patterns of 109 individuals who developed childhood-onset schizophrenia between the age of 12 and 24 years old. According to University of Melbourne electrical engineer and lead researcher Dr. Andrew Zalesky “We’ve looked at the development of brain networks over the adolescent period, from childhood to early adulthood. Abnormalities detected early in the unaffected children normalize by age 16. So why are these brothers and sisters able to overcome the risk? Looking for these biological factors that protect a person from developing schizophrenia opens up a new direction in the search for treatments.” According to Melbourne Neuropsychiatry Centre at the University of Melbourne Dr. Christos Pantelis, a co-author of the recent research study, “New generation medications can help young patients manage their symptoms, but can have significant side effects. Our work has the potential to open up avenues towards earlier intervention with fewer side-effects that improve a child’s resilience to becoming ill. This is an interesting new direction, as it suggests the search for targeted psychiatric treatments for schizophrenia and psychosis requires following young people over time.”