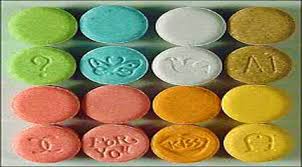 1. 5-MeO-AMT- This is one of the designer drugs that is becoming more widely available in the USA. This substance may also be referred to as alpha or O-DMS, and it is a hallucinogenic drug with effects that can last about 18 hours per use. This drug is one of the tryptamines, and it may be snorted or smoked but a favorite way to use it is to dissolve the powder in alcohol or water and then drip it onto sugar cubes, small paper squares, or candy pieces.

2. Ecstasy- This is one of the club drugs that is very popular, but it can also be very dangerous. Also known as MDMA, ecstasy lowers inhibitions. It can be found in pill form with a wide range of cute logos or pictures on the tablet. Much of the drug sold today as ecstasy does not contain much MDMA , if any at all. These pills can contain many substances, some of them harmful or even toxic.

3. GHB- GHB is one of the designer drugs often sold in clubs and at raves, and it is a central nervous system depressant. The human body does have a small amount of this substance which is produced naturally, but this is in amounts far lower than when the drug is taken orally.

4. Ketamine- As far as club drugs fo ketamine seems to be a popular favorite, in spite of the fact that Special K as it is known on the street is actually an anesthetic used by veterinarians to treat animals during surgery. This drug has dissociative effects on the user.