Are Too Much Serotonin and Social Anxiety Linked? New Study Suggests This May be the Case! 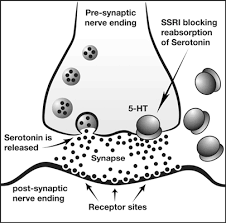 Until the latest study results were received social anxiety was treated with selective serotonin reuptake inhibitors, also called SSRIs. The latest study results were published in JAMA Psychiatry, and these results may force the medical and mental health communities to reevaluate how social anxiety is treated. Mats Fredrikson and Tomas Furmark, both professors at the university, led the team of researchers during the study. A PET camera was used along with a special tracer that could measure the serotonin chemical signal transmission in the brain of the study participants. What researchers discovered was that people who had social anxiety and social phobia had too much serotonin in their amygdala, which is also known as the fear center of the brain.

According to Uppsala University Department of Psychology doctoral student Andreas Frick “Not only did individuals with social phobia make more serotonin than people without such a disorder, they also pump back more serotonin. We were able to show this in another group of patients using a different tracer which itself measures the pump mechanism. We believe that this is an attempt to compensate for the excess serotonin active in transmitting signals. Serotonin can increase anxiety and not decrease it as was previously often assumed.”